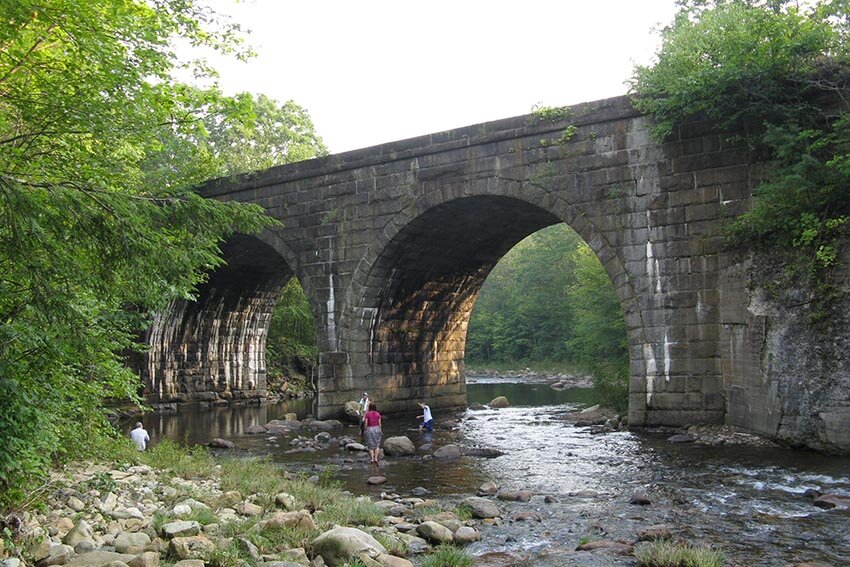 The first keystone arch railroad bridges built in America are wholly dry laid, and range in height to 70 feet. They made possible the construction of the Western Railroad, the longest and highest railroad in the world in 1840.

A Keystone Arch Bridge Trail starts at a stone bridge, still carrying trains. The twisting path then leads under a concrete arch with trains to arrive at two magnificent granite arches bypassed by the 1912 line relocation,70 and 65 feet overhead. The trail then leads through a concrete arch beside a stone bridge, giving a tunnel effect, ending at the only double arch bridge in the series, also in use by the railroad. 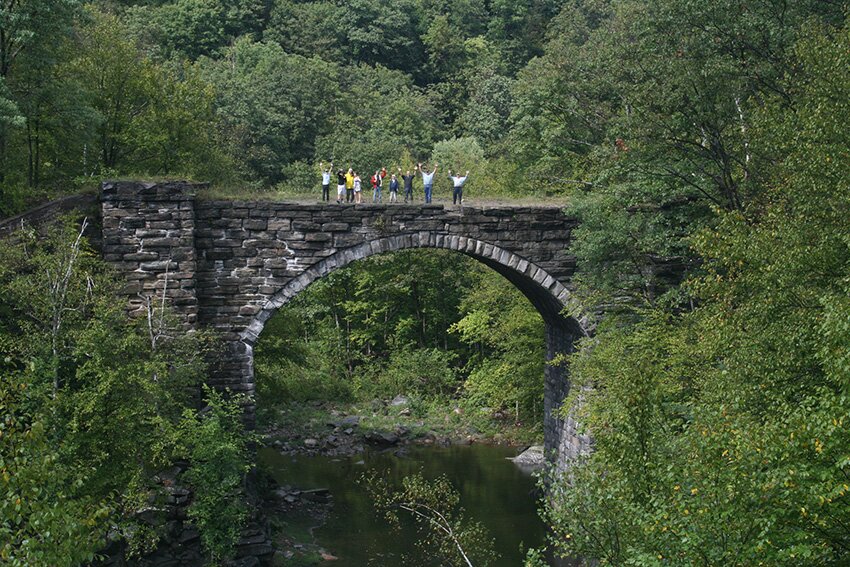 To learn more, please visit the websites for the Keystone Arches, and the Chester Railway Station & Museum.

The Keystone Arch Bridges Trail is an historic and environmental experience mostly within the town of Middlefield and Hampshire County, with portions in Chester in Hampden County and Becket in Berkshire County. The “KAB Trail” not only takes visitors to the first series of stone arch railroad bridges built in America but tracks the first Wild and Scenic River in Massachusetts, all within the commonwealth’s largest roadless wilderness.

“A hiking trail to provide access, a website, public lectures, thousands of pamphlets, a 2011 Senate Resolution, numerous historic listings and a documentary in the works, has failed to bring proper recognition to these structures,” Pierce said. “This preservation objective has been unbelievably complex in spite of the beauty and historic impact found there.”

The true import of these bridges is as elements of the railroad that thrust America to the forefront of global civil engineering, ahead of Britain for the first time, he continued. “Many now-standard methods in surveying and track grading were developed here. The Western (Railroad) was the first to show what railroads must become in America; speculative, long distance, and surmounting natural obstacles. It demonstrated that the possibilities of the technology were limitless.”

Whistler’s Wonders of the Westfield Branch

While the West Branch of the Westfield River is the only one without a dam, that is not to say there are no grand earth and stone structures. Indeed, in terms of structure, the West Branch “rules.” Along its length sit the first keystone arch railroad bridges built in America. They are wholly dry laid, range in height to 70 feet and made possible the longest and highest railroad in the world, the Western Railroad, in 1840.

The passage was ingeniously surveyed by Major George Washington Whistler; James McNeil Whistler’s father. So steep and remote it was said to be impossible, as ridiculous as a “railroad to the moon.” Yet not to try meant Boston would lose ever more traffic to New York as they had since the Erie Canal opened in 1823. The canal siphoned traffic down the Hudson River, but a railroad to Albany could recapture that trade.

Following the West Branch gave the railroad builders the lowest altitude crossing of the Berkshire Range (1458 ft.) The serpentine course of the river made constant bridging necessary. Stonemason Alexander Birnie of Stockbridge was brought in to construct 27 bridges, culverts and walls in the mountain section of the line. Most impressive of these edifices were ten keystone arch bridges over the winding Westfield.

The beauty of these structures has drawn visitors for decades, all trespassers on the property of various successor companies to the Western (now CSX). This dangerous practice was the only access until the recent completion of a hiking trail to two bridges abandoned in a 1912 line relocation. The trail and empty bridges are wholly on the property of the state Division of Fisheries and Wildlife.

While people have worked hard and are willing to hike a long way to experience these monuments, there is another way to see them, including those still carrying trains high above the river; in a kayak or a C-1. Cautions must be given that this is a re-mote area which, in fact, boasts the largest road-less tract in western Massachusetts. Rapids are a “good III to III plus” according to Jeff DeFeo, Whitewater Race organizer. He also says the river is uncontrolled and can rise suddenly or be too low to get through.

A trip down stream from the Bancroft section of Middlefield along Town Hill Rd., takes you along a wondrous Wild & Scenic stream with massive reminders of the Early Industrial Age. The thought may suggest desecration of wilderness but, on the contrary, these bridges, of local stone, have the ability to meld with, even enhance their surroundings, as well as change appearance with the seasons.

The Third Edition of the Appalachian Mountain Club “Classic Northeastern Whitewater Guide” describes an invigorating six mile trip with a 50 foot/mile and up to 100 foot/mile drop. While “rail-road bridges” are mentioned, it in no way prepares the rider for the awesome monuments they will encounter. They do allow that the scenery is “Excellent” and rate difficulty at III-IV.

Some new bridges were constructed with the line relocation, also of the arch design, only built with concrete rather than stone. This trip starts at a stone bridge, still carrying trains, then the twisting path leads successively under a concrete arch with trains, then two magnificent granite arches 70 and 65 feet overhead. These bridges were bypassed and now carry only hikers on the Keystone Arch Bridge Trail. Next is a concrete arch right beside a stone bridge, giving a tunnel effect. This is where the old and new lines diverge. Last is the only double arch bridge in the series. It is also in use by the railroad.

The story of the Keystone Arch Bridge Trail concerns local citizens who took action when progress with a $569,000 Interstate Surface Transportation Enhancement Act (ISTEA) grant disbursement came to a halt (where it remains). The Pioneer Valley Planning Commission had carried the trail planning to a point where there was a hard design for the pathway that could be implemented by volunteers. Ground was broken by an AmeriCorps crew in the summer of 2000. When school began that September, Dave Pierce of the Maintenance Dept. and Joseph Charnley, a teacher, both at Gateway Regional School District, hatched a plan to utilize Charnley’s Outdoor Activities Program (OAP) to continue the trail work during school vacations.

While the winter of 2000—2001 was a rough one, OAP was able to carry out all of the “above ground” work on the trail. This included the effort to cut and remove fallen trees, prune any branches in the treadway and the removal of trees in the trail. AmeriCorps returned in July of ’01, essentially completing the scratch-built portion of the trail. Other sections employ the abandoned roadbed and a portion of the ancient stagecoach road to Albany, the Pontoosic Turnpike.

Much remains to be done, however. There remains an abundance of brush, trees and rocks to be removed from other sections of the walkway. Presently, students in the Art and Metal departments at Gateway Regional High School are working on informational signs to be placed along the trail; this, with the help of a generous grant from the Hill town Coalition for Youth and Community Needs.

The Friends of the Keystone Arches was formed to coordinate efforts in this direction. They offer a trail map free of charge, but donations for the work are accepted and appreciated.

The map may be obtained by sending a large (#10 size) SASE to: